It is always good to stop and reflect on what the Lord appears to be doing. In my case I have been intrigued by strange coincidences. For example, this week I found myself deeply involved in “Church Day” in Germany (Kirchentag) and the Protestant Church’s 500 year anniversary of Luther and the Reformation. This was followed swiftly by spending 2 days with my family at the very British “Big Church Day Out” in West Sussex.

In Germany I took the Red Rope and talked to people in the streets and among the festival installations of Lutherstadt Wittenberg – the town where Luther is said to have nailed his 95 theses to the Castle Church door. For the British Church Day I spent two days there and mostly wandered around confused by the way a Christian music and worship festival had become a massive marketing machine for UK Christian charities.

The contrasts were extreme and hilarious. The similarities, rare but interesting. 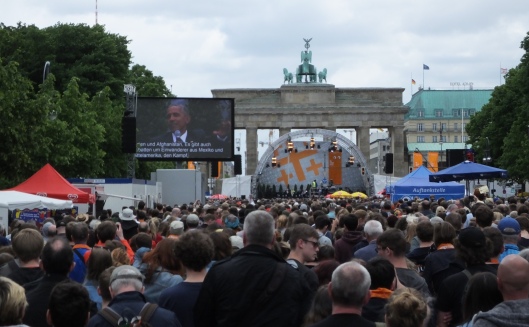 (Above: Barack Obama at Church Day in Berlin. Below: Big Church Day Out in the UK)

Most interesting was the way God seemed to set me up for this experience.

At the turn of the year a number of people asked me where my Red Rope journey might take me during 2017. I mention 2 or 3 places around the world. One of these was Germany. We have a friend there who has been a significant Christian leader for many years – Roland Werner. I wrote to him about the Red Rope and whether he felt there was someone in Germany who should hear about it and then take an equivalent message and symbol around the German speaking countries. Roland’s response was enthusiastic but went off on a glorious tangent: he invited me to join him and his friends in Wittenberg for a week as they set up the “Museum of the Bible” as part of the 500 Year celebrations. So, without realising before that this was an interesting part of the world to visit this year, I was thrust into the heart of the most major event the Protestant churches of Germany have put on in recent history.

(below: A few pictures of the Museum of The Bible in Wittenberg. The festival runs from 28 May to 10 September)

In the last year I have visited Rome (a school trip supporting my son), Santiago de Compostela (visiting a friend of mine as he finished the Camino) and Chennai (taking the Red Rope to minister and pray with our Grassroots’ partners). The link between these three places is that the Roman Catholic Church believes they are the three cathedrals where they have one of the 12 apostles buried – Peter, Andrew and Thomas. The Catholic tradition of relics makes the places where “saints” are buried significant, and apostles are considered the most important of the saints. As such each of these cities and their cathedrals are not only well resourced worship centres but also tourist traps and places of Catholic pilgrimage.

In the case of Santiago de Compostela, the Camino pilgrimage has become famous all over the world as a challenge and a way of trying to find yourself. As a result people of all faiths, weird faiths and no faith all converge on the city, spout incredible philosophies and, while they meet, eat and drink vast amounts. Not exactly the Big Church Day Out, but also extraordinary. I wrote up some of my experiences in this previous blog.

So, why would the Lord have lead me to visit all these places in the context of the Red Rope pilgrimage I am on – Psalm 84v5?

In Wittenberg I met with a wonderful group of people helping set up the Museum of the Bible. Theological students, pastors, a missionary who was home from the Phillipines for a break, scholars and museum people. People deeply committed to Jesus and some who are more committed to antiquities. During the breaks we shared our stories and pray together. We learned from each other. We wandered the streets, art installations, stalls, church stands and other kiosks that are going to be part of the festival. We considered Luther’s lagacy – not all wonderful! We discussed anti-semitism – which still has expressions in Wittenberg including a strange gargoyle known as a “Jew Pig” on the church (picture below)which Luther preached in until his death. (There was a demonstration by Protestant Sisters and Messianic Jewish campaigners asking the local council to remove it from the building. Roland Werner joined with the demonstration for a while and stood with the sisters to show his support.)

In the gaps around the hard work of setting up I borrowed people to walk with me through the town wearing the red rope around my neck. People walked up to me asking what it was about. We shared that the red of the rope represented the love of God and forgiveness of God through the blood of Jesus. We explained that the tags were prayers for friends and family written by people from many nations. People asked us if they could add their prayers. Some were Christians from across Germany. There were Swiss, Dutch, Americans, Spanish and Australians. There were local people who started intrigued by the symbol but once we mentioned Jesus became disgusted and angry – saying they were atheist and wished Eastern Germany was still separate. there were prayers prayed. Tears were shed – in particular for children and grandchildren who seemed so far from God.

I walked down the road to the castle church and saw the door where some say Luther nailed his theses. Across the road from the church door is an ice cream parlour. The main window of this ice cream parlour was decorated with a display with the full 95 theses in both Germany and English. I read them. In their context they were a beligerent and courageous act of defiance to a corrupt religious regime. Today they read very strangely! Luther was a man who made a big difference. He was not a particularly nice man. He had terrible blind spots. He was very typical of many Christians both then and now. But on one major issue he was right and his courage in standing for that issue changed history.

So… those days were an important part of my pilgrimage.

I came home and thought I was now just going with my family to a Christian event. My only regret is that I didn’t take the red rope to the Big Church Day Out. I think the experience may have been similar.

whatever expression of the church I encounter I find the same thing. People doing their best. Often the churchiness is quite ugly and weird. But the people are lovely. Even the leaders are doing their best, but often they get caught up in the jamboree and start marketing or competing for exposure. But in the midst Jesus is walking. He is not happy with the mixed motives. He hates the marketing. One part of him wants to clear the temple and demand, once again, that it becomes a house of prayer for all nations. Another part of him longs that the blood of Jesus would be proclaimed, His mercy invoked, so he can once again show his love and grace to individuals and generations.

(Below: A few photos from Wittenberg startting with “Faith Hope & Love” a display opposite the Museum of the Bible… behind the bins.)

This is the “Jew Pig” on the church Luther preached in. To his last day Luther was deeply anti-semitic. The loocasl council put a plaqued below saying they found the gargoyle offensive. The campaigners say that is not enough. It should be removed.

(Above : Here I Stand. I can do no other.) (Below: other Protestant organisation art installations in Wittenberg.)

This one is about the refugee crisis and represents all the boats sunk in the Mediterranean. 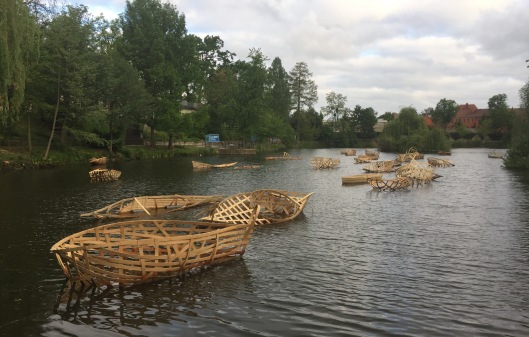 This is harder to explain!? A compost factory that creates a micro climate for tropical flowers!?

3 thoughts on “A Part of my Pilgrimage”