Accumulating knowledge and experience has the downside of increasingly the expectation that the next person you meet can see your whole journey and get your message ever more clearly. But each person you meet only has their own terms of reference and will interpret what you say and do within that framework. Words, symbols, gestures… they all mean very different things as I move from nation to nation, situation to situation. Never more so than when landing in India.

A visit with friends to meet friends and share what the Lord has been doing with us with each other. So the main message I have is what I took to share: taking the blood of Jesus wherever I go and symbolising that by offering people use of the Red Rope as a symbol to help them pray. What could be simpler? I had already taken it to Romania, Spain, Tanzania, Scotland, England and several other places. Each was different. In some I had taken the long, thick red rope with luggage labels to represent prayers. In some places I

had carried it around as a symbol of carrying the Gospel from place to place and bringing Christ’s power and forgiveness to the people. In other places I have taken a long length of smaller scarlet cord, shared the same message but suggested using the imagination to tie their own names and the names of other to the cord. Then there has been the time when we have spoken of taking the blood of Christ from the worship meeting out into the world to cleanse the world and claim the ground for Christ. In this case people have cut lengths from the long cord and taken them to people, places and situations as a prayer act, asking for healing and transformation. In these cases some have tied lengths of scarlet cord to road signs, doorways, beds or the wrists of those who are sick. These acts of prayer have been heartfelt and tactile at the same time. So we have learned and gained new ways as we have gone along. In each new place I have tried to bring all of what has gone before into the collected wisdom to share. All the good ideas that had “worked” before are now ready to be shared in the next new situation.

Then I arrived in Tamil Nadu, India. Very quickly I discovered, from our trusted friend Kevin, that there were serious problems with some of the Red Rope symbols I had been using. Here in Chennai they would communicate very different messages to the one I intended. He explained that people would instantly assume what they meant unless we first had a chance to explain. So, please, do not carry a red rope around the community. Do not tie red cord around your wrist – a very common Hindu symbol. Do not tie red cord to doorsposts – or even refer to painting doorposts and lintels red – as these were something commonly part of both Hindiuism and local Islamic spirituality. In fact almost every Christian symbol from Old Testament or New had been appropriate by the various religions which saturate Indian culture with bright colours, spots, materials, flowers, smells, ceremonies, altars, shrines and the like. It may provide “local colour” for the tourist but for local people everything already had a meaning and those meanings did not point people to Christ. Far from it, they were active and extreme acts of non-Christian spirituality and belief.

Solution. O yes there is one. Teach from the Bible. Show those who are becoming Christian disciples where the original symbols are found in Scripture. Explain that these things belonged to the Living God first. Take enough time for people to understand and get their personal spirits, minds, consciences in line with the mind of Christ and the thinking behind Scripture. Then, confidently do all that you would have done before.

le around the community, we took the blood of Jesus with us, and we prayed in His name for those we met. There was no red cord around our wrists or red rope around our shoulders. But the Gospel was on our lips and in our hearts. In my hand I carried a Bible – an small, old fashioned paper one with a black leather cover – as Kevin agreed that was a symbol that this community would understand that a Christian minister would carry when he or she came to pray in the name of the Triune God.

Then Sunday came. The church was packed. About 500 people, almost all who had become believers (from various forms of non-Christian background) since Kevin and Deborah had started ministering in the name of Jesus in this Chennai slum. They were fervant in their prayer and worship. Hungry for Christian friendship and the understand more of God’s plan. I stepped forward with our large red rope – covered with prayer labels from the other nations and places I have been – each a fervent prayer. Kevin explained from the Bible why I was using a red cord. (He said he was translating what I said but he added quite a bit he thought people needed to hear!) Then people responded.It was great. Powerful. Real. meaningful. Christian. Christ centered. The symbol was a sign post that was pointing in the right direction. 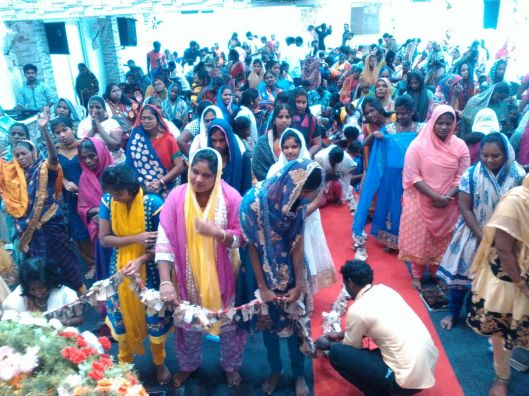 Also the same in the villages church. 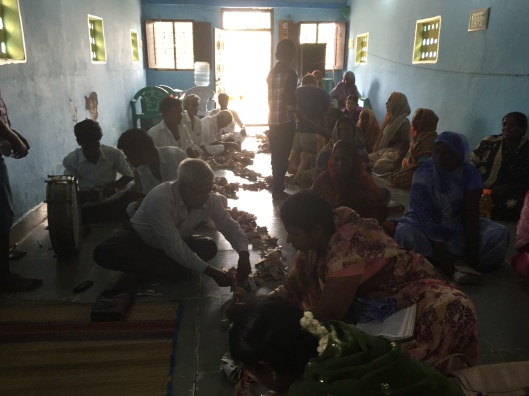 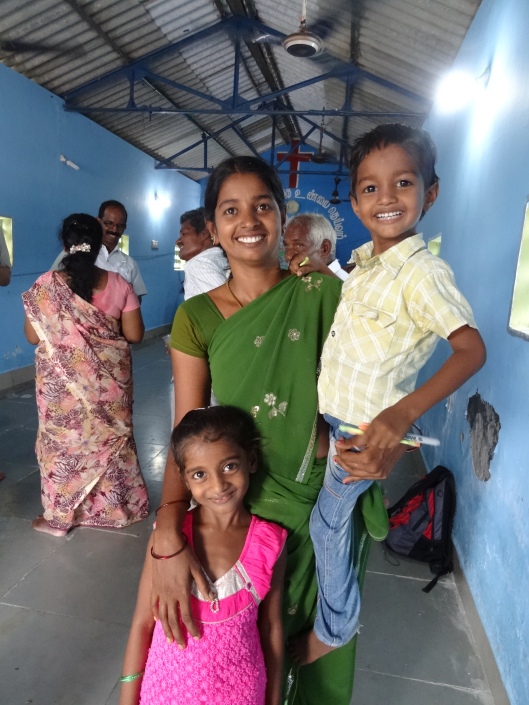