Prayer does not necessarily have a visible footprint in the temporal world. The human condition seems to leave us desperate for something temporal (ie: visible and “permanent” in this time/space continuum) in order to believe it is worth supporting or has established anything worth celebrating. Ever since David was obsessed by the need to build a temple spiritual prayerful movements have been obsessed with owning property or demonstrating a physical legacy. But God is building a kingdom that cannot be shaken, that exists where moth and rust cannot decay it. God is concerned with a temple that is not made by human hands; a heavenly building that is best represented on earth by a mobile tent and a carried throne, not an earthly, stationary building. God is showing us that what really matters is the heavenly Jerusalem, not the earthly Jerusalem; the heavenly Mount Zion, not earthly mountains. (Hebrews 12:18ff) But we don’t like that and keep reverting to type.

Recently a friend of mine suggested I need a new red rope, one that was clean and did not have any prayer tags attached. He told me to store the one I had and start again. I listened but was not sure. Part of the symbol is holding or adding prayer tags to the same red rope (representing the same Blood of Jesus, same Gospel, same salvation, same so much….. ) that others have held and prayed with. If I started again that symbol (and possibly that power?) might be lost.

About the same time an opportunity arose to go and prayer with some people where taking the Red Rope might have been tricky. Even walking down the road in Surrey it can be hard to explain why you are carrying a red rope with thousands of luggage tags attached. How much harder explaining it to a customs official in a less than friendly airport. Not to mention the fact that it now almost weighs 2/3s of the max weight of the average airline luggage allowance. So, even though I felt sure I need to take the red rope with me in a spiritual sense I was being asked not to take the physical rope with me. What to do?

Then it dawned on me. Every day I have a new red rope. Every day I carry the ever ancient red rope. His mercies are new every morning. He is the same yesterday, today and forever. The gospel and salvation that is beyond time and space (Heb 5:9 & Rev 16:6) and yet can touch our lives in any space and time when we approach by faith (Romans 1:17). A red coloured gospel that worked for Moses when his wife took the blood of his son’s circumcision and touched it on his feet (Exodus 4:24-26). Red coloured blood of lambs doubed on door lintels and door posts that was enough the first born of every Israelite family to be saved when the Lord passed over Egypt. (Exodus 12) The same red cord as Rahab – not in the sense of a dodgy crusader relic brought back and displayed in some cabinet, but the far greater and more real red cord of Christ’s blood that somehow connected with the very physical and temporal red cord that Rahab held in her hands but which rotted and returned to the soil within, at the most, a couple of generations. There is a red rope that is bigger and better and longer lasting that any physical red rope will ever be. It may be invisible, eternal, intangible and hard to define but it is nevertheless longer lasting, more effective, new and fresh every moment.

So I jumped on the plane with that red rope. Far easier to take through customs. Nothing to declare except all that we declare.

In fact I took some red cord. A new reel. This red cord was there to help people connect with the one real red cord. It was still the same red cord as I always took. And yet it was also a new red cord. 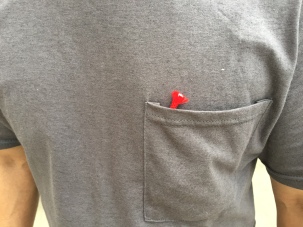 On one occasion on the trip and unreeled the cord all the way around a room and asked everyone to hold it. To hold it as a symbol of connecting to the one red cord – the blood of Jesus and the eternal promise of God’s salvation. They all did. they then took out knives and cut pieces off. Some saw I had tied a piece around my wrist. Others just shoved a piece in their pocket. They took these bits off to use as symbolic prayers. Some were tied on door posts or lamp-posts to state they wished that home, building or area needed to come under the rule of the kingdom of Jesus. Others were taken into homes to break curses or proclaim healing. Others were tied to people as a way of claiming God’s blessing upon them. Most were tied with faith in Jesus, not just superstition. Some were carried as a symbol so that when the person prayer walked they could believe and think and imagine that they were walking in Jesus’ name and not just in their own. All good stuff!

The next few days I followed suit. Everywhere I went (in what was quite a tricky situation) I carried some red cord in my bag and tied some around my wrist. Over and again I came upon situations where I felt I (along with others) should pray and then give them a small length of red cord. Each time it had a slightly different application, but each time it related back to the original, real red cord that none of us can see but all can access in Christ. Some lengths were left on very sick people’s wrists as part of the prayer we had prayed for their healing. Another was left with a pastor whose surrounding community appeared hostile as a symbol to him to remember that amongst his enemies there were those God knew were open to believe and be saved – just like Rahab in Jericho.

I don’t know how effective our prayers were (James 5:16). We prayed and we tried our best to see God’s kingdom come on earth. We prayed for the “Not Yet” to become the “Now”. We reached out and claimed Jesus’ promise that the kingdom of God is not just a “Not Yet” hope but also a “now” reality. We felt changed by praying but we looked for healing and transformation in this temporal life as well. We saw new Christians being formed and those Christians who were already there (along with us!) being formed more into Christ’s likeness and into the invisible building/temple – the one which the Holy Spirit inhabits. We expected and pleaded and challenged ourselves to expect more. We know that nothing is impossible with God so we were expecting more than nothing to happen. Prayer is about that – expecting the invisible, eternal and real grace of God to break into our visible, temporal and less than real world and transform it.

But we did not set up booths, (Matthew 17:4) put down payments on new “temples”, look for dedicated “prayer houses” to be “established”. Why? Because that is a distraction, a mere copy of what is real (Hebrews 9:24), unnecessary once you have entered the genuine “prayer house” that is in the eternal realm. Raising money for physical buildings may work in the ministry newsletter, it is easy to explain and so often attracts more funds. But what we Christians should really be funding is the building of the invisible temple, the invisible kingdom, and the spreading abroad of the message of the invisible gospel of salvation made available to one and all no matter what building they meet in and no matter when and where they gather in His name.